As Close to Us as Breathing 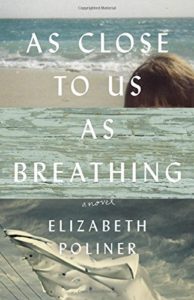 As Close to Us as Breathing

A spellbinding multigenerational family saga by “a wonderful talent who should be read widely” (Edward P. Jones)

In 1948, a small part of the Woodmont, Connecticut, shoreline affectionately named “Bagel Beach” has long been summer destination for Jewish families. Here, sisters Ada, Vivie, and Bec assemble at their beloved family cottage, with children in tow and weekend-only husbands who arrive each Friday in time for the Sabbath meal.

During the weekdays, freedom reigns. Ada, the family beauty, relaxes and grows more playful, unimpeded by her rule-driven, religious husband. Vivie, once terribly wronged by her sister, is now the family diplomat and an increasingly inventive chef. Unmarried Bec finds herself forced to choose between the family-centric life she’s always known and a passion-filled life with the married man with whom she’s had a secret years-long affair.

But when a terrible accident occurs on the sisters’ watch, a summer of hope and self-discovery transforms into a lifetime of atonement for members of this close-knit clan. Seen through the eyes of Molly, who was twelve years old when she witnessed the accident, this is the story of loss and its aftermath, of expanding lives painfully collapsed. Can Molly, decades after the event, draw from her aunt Bec’s hard-won wisdom and free herself from the twin burdens of guilt and memory?

Elizabeth Poliner is a masterful storyteller, a brilliant observer of human nature, and in As Close to Us as Breathing she has created an unforgettable meditation on grief, guilt, and the boundaries of identity and love.

“A lovely, lovely book.”
Elizabeth Strout
author of the Pulitzer Prize-winning Olive Kitteridge
“Vivid, complex, and beautifully written, As Close to Us as Breathing brims with characters who leave an indelible impression on the mind and heart. This moving story of the way one unforgettable family struggles with love and loss shows an uncommon depth of human understanding. Elizabeth Poliner is a wonderful talent and she should be read widely, and again and again.”
Edward P. Jones
author of the Pulitzer Prize-winning The Known World
“Beautifully written, stringently unsentimental, and yet tender in its empathy for the perennial human conflict between service and self.”
Kirkus Reviews (starred review)

Editor Lee Boudreaux on As Close to Us as Breathing:

Two things instantly captivated me about this novel: the autonomy afforded to Ada, Vivie, and Bec by inheriting “a room of [their] own” in the form of a summer beach cottage—and yet these female characters live in an era when they must depend on a husband or a son to drive them to it. This paradox is just one of many rich details that brings this specific time and place to life on every page of this beautifully crafted novel. And I was deeply moved by the sense of duty and familial devotion which Poliner conveys with unwavering empathy. Even while we pray for Molly, Bec, Nelson, and the others to shed their burdens of grief and guilt, we also see the abiding satisfactions of faith and family, of belonging to something larger than oneself. From the book’s first page, the beautiful rhythms of the language (it’s no surprise the author is a poet) and the feeling of being wholly transported to a different time, with its very different mores, held me in thrall.

“How Mapping Alice Munro’s Stories Helped Me as a Writer” (essay), Literary Hub (lithub.com), April 2016
“I Feel Like I Can Breathe Here” (essay), Omnivoracious: The Amazon Book Review, March 2016

Buy a copy of As Close To Us as Breathing

Choose a vendor below