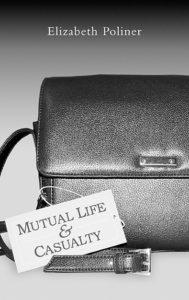 Mutual Life and Casualty is a compelling and meticulous portrait of how a well-meaning but troubled family shapes the lives of two young sisters as they emerge from childhood and enter adulthood.

The era is the 1970s and early 80s and the sisters, Hannah and Carolyn Kahn, have a lot to contend with. More than anything, they face the dark cloud of their parents’ fragile marriage: a workaholic father who sells insurance and a shopoholic mother who would like to leave her loveless marriage but is too scared to do so. This divorce that won’t happen is at the heart of the girls’ struggles.

Add to that the ongoing social pressures of the time: women’s changing roles, Vietnam’s lingering pall, and families breaking apart generally. Further complicating the sisters’ lives is their status as the only Jewish family residing in their small Connecticut town.

In this novel of compassionate and beautifully interwoven stories, Elizabeth Poliner’s debut integrates the lives of Hannah and Carolyn with those of several other town members. In the end,Mutual Life & Casualty refers less to the Hartford insurance company where the girls’ father works than to the interconnectedness of all Poliner’s characters and the wounds they suffer because of it.

“On the surface, Liz Poliner’s stories are as simple, even tranquil, as the women and girls who serve as their subjects. But beneath this simplicity, behind these ordered and ordinary lives, Poliner discovers depths of pleasure and grief, disappointment and resilience, that give the reader a new appreciation for both the quiet desperation and the quiet joy of these complex women’s ordinary lives. This is a lovely, impressive debut.”
Alice McDermott
author of Charming Billy
“For more than ten years, I have been aware of Elizabeth Poliner’s talent and the wonderful work which flows from it, so I am not at all surprised by the superb stores in Mutual Life & Casualy. This luminous and vibrant novel in stories with its range of memorable women herald a special, sensitive writer. Elizabeth Poliner’s work should be favored and read again and again by as wide a population of readers possible.”
Edward P. Jones
author of The Known World
“Home is a battleground where lives are lived on autopilot in Poliner’s auspicious debut. Sisters Hannah and Carolyn Kahn quietly inhabit a fragile home and suffer their parents’ loveless marriage, an unhappy union that poisons their adolescence and haunts them as adults. Fully realized sympathetic characters, frank exploration of women’s self-assigned roles and tight writing make this a forthright, satisfying first effort.”
Publishers Weekly