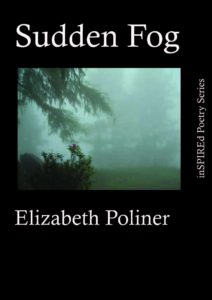 “Elizabeth Poliner has a remarkable ability to speak intimately and eloquently about mothers, daughters, loves, books, music, and the discipline all that takes. The poems in Sudden Fog are sound and passionate, inviting and rewarding.”
Dave Smith
author of Little Boats, Unsalvaged
“Elizabeth Poliner’s poetry, like her fiction, ushers us into a world of feeling. It’s as if her work is a deep lake that gives back to us, her readers, a true vision of ourselves as humans who feel and are aware of feeling. Because of this, Sudden Fog, rich with intelligence and events, offers mystery and illumination in amplitude.”
Kelly Cherry
author of The Retreats of Thought: Poems
BUY NOW

I move my copy of Elizabeth Poliner’s Sudden Fog from one place to another in my house, but in the months since I bought it, I’ve yet to slide it in among the books in my shelves, the ones I take out only once in a while. I’ve been keeping it within easy reach. It’s companionable in various ways, not the least of which is its weight – a chapbook, and so it’s light in the hands – and the look of it – mostly black and white letters and a tantalizing photograph of a fog-shrouded landscape, startlingly foregrounded by the red dot of a single rose. It’s an image that transforms the ordinary world into a mysterious and intriguing vision. The book’s major subjects are painting, literature, and music – along with death, illness, friendship, family in general, and a daughter-mother relationship in particular.

Though they have the integrity of formal poems, all the pieces of Sudden Fog are in free verse, and they’re various in their line-lengths and stanza arrangements. Only three fit on a single page; the longest extends through four pages, but that one is divided into six very different sections. The language of the poems is that of a speaking voice in varying moods. Subtle, deeply serious, culturally informed, and intellectually substantial, these poems nevertheless speak so clearly that they engage a reader almost immediately; here, for example is the first line of the first poem:

Waiting in line I know I know nothing.

Poliner applies uncommon clarity of mind to the most challenging and complicated issues of human life- and one suspects that the act of composing poetry is the method by which these instances of mental clarity have been achieved. Contemporary in subject matter, these poems possess the patient thoughtfulness, and the modest restraint of poets a couple of generations back – Elizabeth Bishop and Richard Wilbur come to mind. They’re poems that probably took months – rather than hours or days – to write. These are exactly the poems that Dean Young, Matthew Zapruder, Jorie Graham, and Brenda Hillman strain so hard not to write. Not only does Poliner wish to be understood, she also means her poems to offer the reader pleasure, insight, and consolation:

If the stars in the clear night’s sky
are all the notes Bach wrote
and all he ever imagined
then the universe is indeed
of incomprehensible scale.

I can’t hear the song
the night could be singing.
There’s only this rocker
marking audible time,
forward:two, backward:two.
Repeat: endlessly repeat.

There’s the moon, too,
tonight a whole note,
perfect, round, commanding,
splashing a sonata of light
across the bay.

Eight of the book’s twelve poems mention or discuss works of art – these include a play, a novel, a number of paintings and painters, a couple of poems, musical compositions, instruments, and composers. This is a book that’s drenched in art, a book that speaks out of longtime, deep engagement with works of art and with the making of art, a book that seeks to understand the place of art in human life. In the poems of Sudden Fog, Elizabeth Poliner carefully and movingly demonstrates art to be a viable consolation in these precarious times.

Buy a copy of Sudden Fog

Sudden Fog is available for purchase by the author. Contact Elizabeth Poliner to buy your copy!